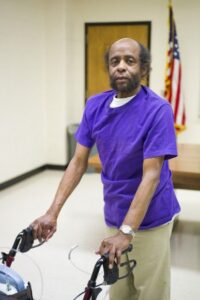 David Rice, better known as Mondo We Langa, was a political prisoner held captive in Nebraka State Penitentiary since 1971 for the alleged murder of a police officer. He was a member of the Black Panther Party and wrote for an underground newspaper called Buffalo Chip prior to his incarceration, and while in prison, he continued to maintain a prolific record of writing. He passed away in 2016.