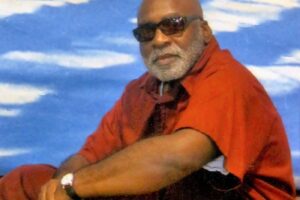 Dennis “Solo” McKeithan’s story is all too common in Philadelphia – a place where the police have a long legacy of corruption and racism.

The Sweet Love Lounge at 26th and Cambria in North Philadelphia was robbed at 11 pm on the night of October 26th, 1982.  During the heist not a shot was fired, no one was injured, and under $1200 dollars was taken from the till and the pockets of five patrons who were robbed.  The kicker – Dennis was not even there!

Yet Dennis McKeithan has served 37 years of a 55-110 year sentence for five counts of robbery (each was run consecutive). His earliest release date is 2037, if we do not stand up.

Marvin Nelson, Sweet Love Lounge bar owner, wasn’t present during the robbery – and yet floated McKeithan’s name, telling investigators “that McKeithan was one of the robbers.””  Nelson, a disgraced Philadelphia police officer, had been fired from the Department for conduct unbecoming an officer. He rode along with officer John Fleming, the arresting officer and a figure in notorious police scandals. Nelson interviewed multiple witnesses, and “conducted” the investigation.  It quickly became a frame-up.

Carl Cooper, a friend of Nelson and Fleming, testified before the jury that he was a former police officer who had been wounded in the line of duty and that Dennis had assaulted him while robbing the Sweet Love Lounge.  But Cooper lied about being a cop: he never was one. He was never wounded in the line of duty. He conveniently forgot to mention that he was a prolific testi-lyer for police and “muscle” at a number of illegal numbers joints.

But the truth has a way of coming out.

Jean Wilson, the Sweet Love bartender the night of the robbery, calls for McKeithan’s release and recanted her original identification of Mr. McKeithan:

“I told the police over and over again that Dennis was not there…they just kept badgering me…they came into the bar all the time…I was nine months pregnant during the trial…. I am so sorry…”

One of the actual robbers of the Sweet Love Lounge, Derrick Harold, described how he was coerced into implicating McKeithan:

“Dennis Solo McKeithan was not at the Sweet Love Lounge. He was not one of the robbers….the police were only focused on getting Dennis…during my interrogation, they handcuffed me to a chair for hours and denied me food and water. I could not go to the bathroom…they kept showing me Dennis’s picture and told me I had to sign their statement”