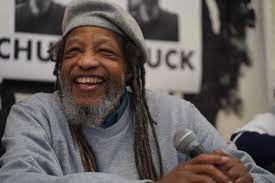 Delbert Africa is one of the MOVE 9. He has been in MOVE almost since the beginning.

Before MOVE I was a confused individual, even though I had thought I knew what revolution was, based on the theoretical outlook of Marxist-Leninist social democracy. I can still say, because I didn’t know how to clean up the system’s garbage in me, I was a thrown off person.

I had originally joined the Panthers not for any uplifting of people’s rights or freedom. I joined it on an ego trip. It went along with what I was thinking anyway. I liked armorments, regime, discipline, power, chauvinism, and all that. It was convenient. The only reason I joined the Panthers was because of a woman that I met at a party, the Minister of Health. I was hitting on her and she said straight up “I’m tired of all y’all handkerchief head niggers coming up with this lame stuff,” and that blew my mind. I said, “What?!” and she said, “Yeah, y’all handkerchief heads ain’t got nothing going… blah , blah, blah.” So then I started hitting on her asking, “OK, where you coming from?” She ran down the whole party line for me and that’s how I got interested in the Panthers.

We’ve often been said in MOVE that the basis for this revolution of ours is the women and it’s been born true. In MOVE all the women that have been attracted to MOVE have more staying power in the long run then men, not that men aren’t on that level. I’m saying that women just basically do not like to drift away from MOVE. I always say that our sisters and our wives in MOVE definitely are stabilizers. Whenever I was in trouble they were always there. I just love ’em, just the joy of working with them over these years. I thank JOHN AFRICA for they influence all the time!

I first encountered JOHN AFRICA’s teachings in Phila while I was on the run. I was in the Black Panthers. In 1969, the leadership hierarchy of the Chicago chapter all had false warrants put forth, which I was one of them. Myself and 2 members fled to Canada. We were doing bad, we met other members of the Party while we were up there and we were doing very bad and could not get any financial support from the party as a result. We did stick ups to take care of ourselves. It was going bad.

During one foray back into Chicago, on my way back to Canada I got into a car wreck, a very bad car wreck where my cousin and another friend of ours were killed in the car wreck. In October of 1969, I ended up in the hospital. I was interviewed in the hospital by the FBI because we were in a stolen car, by the way. I completely evaded all their warrants and everything. When I got out of the hospital I rejoined the other 2 up in Canada after a 3 months stay because I was in a very bad state. In March of 1970, we decided to come down to Phila because one of them was originally from Phila. And we thought we could make some contacts there, which we did. Our first apartment was in Powelton Village. I ran into MOVE people on a corner in 1970 talking about revolution. I approached them on the basis of “Well, what you saying is good, but what about the Red Book and what about Democratic Socialism?” They gave me a quick, simple answers of what revolution MUST be in order to work for everyone, which completely shot down all that theoretical scientific nonsense that I was equipped with. The people I was with went back to Chicago because the warrants were dropped. I refused to go back because I was still suspicious of the system.

I ran again into MOVE people and I stayed from that time on because I was intrigued with what I was hearing, it was uplifting. I was even given some information because I still had braces on my leg. I had a back brace and a nerve injury in my leg that prevented me from moving it and I had been told by the doctors that I wouldn’t be able to run again, that I would walk with difficulty and so forth. Some information I had gotten from MOVE Law just put me on my feet, was cooling me out and everything. I have been here ever since. That is an oversimplification, but that’s just what the fact of what happened. Everything I was getting from MOVE was generating me, making me stronger and exposing all the lies I’ve lived under.

In 1978, during the confrontation, the cops videotaped other cops beating me. It was regarded as one of the worst instances of police brutality ever caught on tape. I recovered right after they stopped, I was getting better. It’s hard to describe it, that when they originally started beating me from the first cop in front of me hitting me with that helmet. The other fool put the shotgun stroke on me, put the butt stroke with the shotgun on me. From that time, MOMMA had just put me in a state of mind where I could feel the pressure from all the blows, the kicks and all that, but they wasn’t really hurting me. I can remember after they beat me, during the segment that everybody seen during the video tape, they drug me across the street to where police commissioner O’Neil the Chief Inspector, and other high rankin cops was at, and they was beating me over there. That’s where I saw Phil and I can remember, and Phil remembers, me telling him, “It’s gonna be alright.” Some cop was about to put his foot on Phil’s neck and I yelled at them to stop and I told Phil, “We’re gonna be alright,” and Phil said, “That’s right. On the MOVE! Long Live JOHN AFRICA!” Phil was on the ground and another cop was about to kick him and O’Neil, the police commissioner, said, “Don’t do that here because the cameras can see us.” So then they separated me and put me in a wagon, but I never knew how bad I was hurt.

That night, after separating me from the rest of MOVE members, they took me to Holmesburg prison, a nurse thought to give me an apple to eat. I said, “Thank you” and I went to bite down on the apple and my whole face just froze. It wouldn’t work. I literally had to pull the apple out and that’s when I found out my jaw was broken, my eye socket was fractured and all of that. I wasn’t feeling hurt. In fact, I was just feeling angry at the thought of being captured.

I was held in the “hole” for 6 years. I originally went in January of 1984. I was at Dallas since August 1981. In December 1989 I was transferred out of Dallas because they had riots at Camp Hill prison, which I wasn’t even a part of, but the state prison saw it as an opportunity to get rid of so-called trouble makers. So they transferred me to the Federal system. We were under 23 hour lock up here, 24 hours lock up on weekends where they wouldn’t even let us out for yard. I stayed down there until May of that year. Then they transferred me to another prison. After looking through my records, they told me we don’t want any trouble with you, but if you give us any trouble we’ll lock you under. I said, “OK, I ain’t got no problem with that.” They even wanted to give me one of the prison jobs of printing in the printing shop. They were mystified when I turned them down because they were starting off prison wages good, it was $86 a month. I said, “Naw, I don’t want that.” They said, “Wait a minute. This is just starting off, you can move right on up.” I said, “Look, I’ve been in the hole for 6 years. I want some air! I don’t want no career in the prison.” So they assigned me to the yard detail. And that was it, I loved that. I stayed in there a year and they shipped me back to state. When I got back they put me in the hole for about 3 weeks, then I got out, they put me in population.

I would like to put one thing out there about the need for everybody to join this revolution. We always speak of JOHN AFRICA’s revolution, we speak of that only in terms of people knowing that this is the impetus for giving US the direction, the drive to carry on this, but the main thing we always stress is THIS IS FOR EVERYBODY! Just as everybody’s heart has to revolute, beat, and everybody’s lungs has to revolute the old air out, the new air in, so it is that everybody has to revolute, beat, and everybody’s lungs has to revolute all the heart attacks, all the lung disease, all the hemorrhages, all the problems of life is caused by this system. So what we’re doing is necessary for everybody to do on whatever level they can do it on. That’s what I want to put out to everybody.